We all know that Google+ hangouts is a unique feature in Google+ that allows us to do a webcam based video conferencing or otherwise known as group video chat. It allows up to a max of 10 users to participate in a single hangout at the same time.

Now when you are hosting a hangout, we are pretty sure you might have came across at least one of these following scenarios

and there could be many other reasons besides mentioned above. Google listened to these feedbacks and now there is good news. Today they announced the launch and support of inviting and joining a google+ hangout using any phone just using a phone number(same as any other audio conferencing but with one difference, the host of the hangout dials the phone number out). 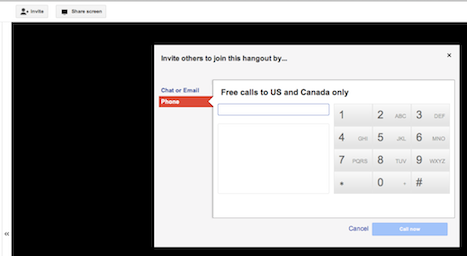 Inviting to an hangout using a phone number is really simple

As of this writing it is free in the US and Canada. This is a great and wonderful feature added to Google+ hangouts that will draw more crowd towards hangouts.