In just few days we are going to say good bye to year 2011 and welcome new year 2012. Inorder to re-coup popular searches on google search engine, zeitgeist has released top searches for the year 2011.
According to Zeitgeist

Zeitgeist 2011: How the World Searched

What mattered in 2011? Zeitgeist sorted billions of Google searches to capture the year’s 10 fastest-rising global queries and the rest of the spirit of 2011. 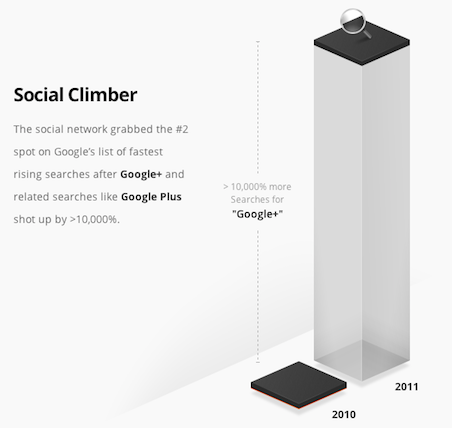 Guess what was the keyword that took the #2 spot?

You guessed it right, keyword Google+ or Google Plus grabbed the #2 spot on Google’s list of fastest rising searches in 2011 with searches shot up by greater than 10000%, wow!!

On another note, between July 3rd and July 17th search / interest for the keyword Google+ or Google Plus surpassed that of keyword Sports.

Interested in knowing more about this? Google Zeitgeist 2011 has nice slides about this story, you may want to stop by and check it out.