She is one of a kind in the music industry with so many achievements under her belt : 4 Guinness world records, 5 Grammy awards and 13 MTV video music awards to name a few. 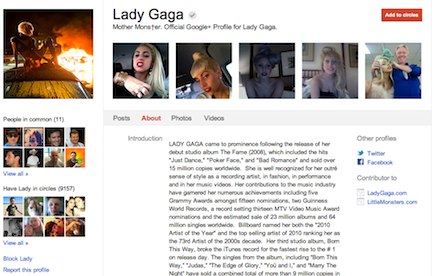 Besides music industry, she is very popular and active in the social media world. As of this writing, she is one of the most followed on Twitter with 18 million+ followers and her Facebook profile has over 45 million+ likes (a remarkable achievement).

As of this writing she has 9157 followers on Google+ (which almost doubled in 2 hours we watched from 5000+). This number is nothing compared to two of the most popular celebrities on Google+ Britney Spears and Snoop Dogg (both have crossed 1 million+ followers recently).

But, given Lady Gaga’s track record on Facebook and Twitter, it’s exciting to watch how she will do in Google+.

Anyway this is great news for her fans as well as Google+ which is attracting more and more celebrities.

We take this opportunity to welcome her to Google+ and wish her success.