It was first Britney spears (yes the popular recording artist and entertainer) briefly followed by Larry Page (co-founder and ceo of Google) who were the two most followed people on Google+ and first G+ users to achieve the first million followers. 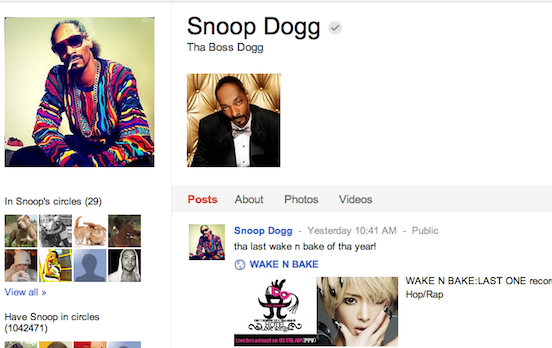 Snoop Dogg has over million+ followers on Google+

We have reported earlier that Snoop Dogg will be likely the next person to join the million followers club. And finally quite sooner the day has arrived. As of yesterday he successfully crossed the million followers with as of this writing got 1042471 followers. He is currently holding the #3 popular spot in Google+.

But that is all going to change soon. According to the time of this writing he is just short of 2200 followers behind the #2 spot of Larry Page. We won’t be surprised in next couple of days he’ll gain that many followers to capture the #2 top spot on Google+. Larry watch out!!

Snoop is a regular and active user on Google+ with almost a posting every day. Interestingly he even challenged (refer image above) Mark Zuckerberg when he once was the popular person on Google+ to get his top spot.

Once thing is for sure; the million+ followers club is growing and at the same time, the race is heating up to gain the #1 most followed person on Google+.

Congrats Snoop Dogg! on your remarkable achievement in such a short span of time.

Today Dec 31’st 2011 as of this writing, Snoop Dogg surpassed Larry Page‘s followers and became the #2 most followed people on Google+