KPCB (Kleiner Perkins Caufield Byers, a leading venture capital firm investing across all stages of new ventures and in a range of market sectors) publishes Internet Trends report each year.

Today during AllThingsD D11 conference they released 2013 Internet Trends report for the year ending 2012. It is a huge report that spans over 117 slides and covers internet, social media, mobile usage and a more wide variety of topics. 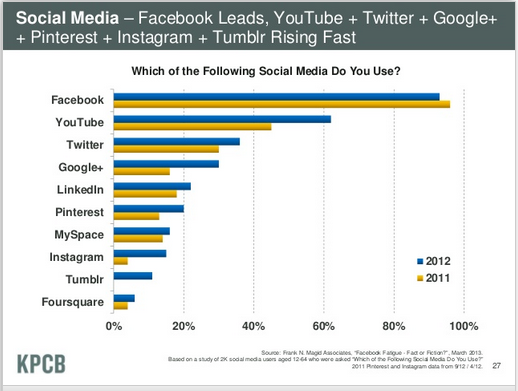 Google+ usage doubles in 2012 according to KBCP Internet Trends 2013 report!

According to the slide 27), It clearly shows Google+ usage and adoption has doubled when compared to that of previous year in 2011 and closing in the use of Twitter. This is inline with the report published by GlobalWebIndex earlier this year that Google+ unseats twitter to become the second largest social network.