The New York Times, the popular american daily newspaper is experimenting in using Google+ hangouts to connect with it’s readers.

Sam Grobart and Jenna Wortham from New York Times participated to connect with the readers and talked about All Things Tech. 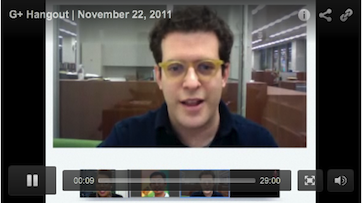 It was a very casual talk. Roughly of about 80 readers joined within the 30 minutes session. According to Sam, this was the first video or web cam discussion directly with the readers in over 150+ years of that newspaper’s history.

It is really cool to know that technology and social media thinning the gap between media and common people. You can watch the recorded video, read more and provide feedback to New York Times here.

Once again Google+ hangouts is proving to be the hottest feature on Google+.