Titled un-officially “The occupation of the obama”, a large number of chinese internet users bypassed the china’s firewall and flooded president Barack Obama’s Google+ profile with comments asking for help.

We were curious in knowing whats been posted but unfortunately since chinese language was foreign to us, we have to take help from the Google+ translate plugin (a wonderful plugin on the fly translates almost 50+ languages). 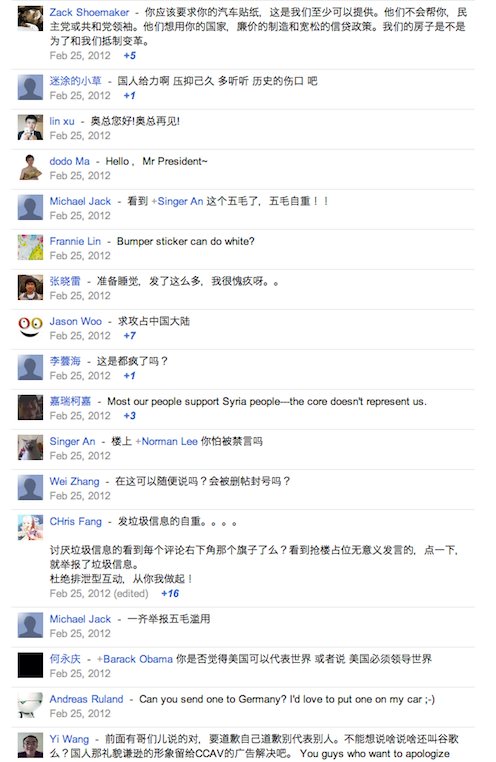 A quick look at the comments looked like spam but after running translation we realized they were legit and were posted for a cause; Asking for help from the US and International community for the release of the jailed blind lawyer Chen Guangcheng as well as making China more open and free speech.

What makes this even interesting is, all social networks including Google+ is blocked in China. Then how did chinese internet users manage to sneak China’s firewall and post on Google+? That is still a mystery. But one thing is for sure, their original intentions were achieved. This definitely grabbed attention and their message reached the international community.

Dear President Obama, I’m sorry your information irrelevant comments. Endorsement and trust in a consistent respect for human rights in your country, and solid in this message I hope the government of your country in the international community called for the return of a blind lawyer Chen Guangcheng free. Thank you!

I Like the red,white and blue bumper sticker.additional,please use your power to add pressure on Chinese government to free Liu xiaobo,Chen guangcheng ,Tan zuoren and GAO zhisheng

Help the Chinese people is to help the whole human race, the President you know staged every day how much ugly? Without dignity, the metamorphosis terrible hell, so much a terrorist state to have an impact on human society, you know.

Some of the grammer doesn’t add up due to the slang and machine translation but you get the idea.

Want to know more? please install the translation plugin, visit Mr. President’s Google+ page and read comments for yourself (to get a better idea about this).