It was first individuals then celebrities joined Google+ briefly followed by businesses through Google+ pages. Guess who is next? You guessed it right, politics and politicians! 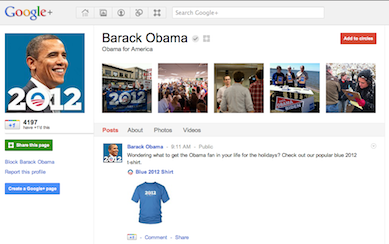 Circles are a great way to organize people into different lists and share content specifically matters to them. Some examples for Obama’s campaign could be, Red States, Blue States, Independent States, Swing States, Campaign Managers, A circle for each state, etc… the possibilities are endless.

Google+ hangouts is unique and free video conferencing feature of Google+ with the power of social networking. Start a hangout and invite your circles to participate which allows realtime video interaction with additional benefit of text chat, sharing screen, documents or sketchpad. Ideal tool for conducting virtual town hall style meetings for a political campaigning across the US even without leaving the campaign office.

All posts, comments, photos or videos comes with built in +1 button which the author could leverage to ask for support from the readers or followers.

When the Google+ page becomes quite popular and selected by Google for direct connect (quite easy for popular candidates), that page will get similar to Google search I’m feeling lucky love. Just by typing + in search will provide page suggestions and take directly to that page.

Share your campaign pictures that happen simultaneously from different regions with rest of the followers and get real time feedback. Google+ instant upload allows to upload photos as you capture.

Every piece of content; post, photo or video on Google+ has support for comments which allows to discuss and get feedback directly from readers.

The one page that would glue all the above features / tools together and serves as the entry point / homepage / landing page for the campaign.

It is not always possible to sit behind a desktop and use the above mentioned tools. On the road, Google+ instant upload for mobile, Google+ messenger or huddle, Hangouts using mobile, etc are some of the many other features that allow to keep your audience engaged right from your mobile or smartphone.

With the creation of Google+ page for the 2012 election, we are convinced that Mr. President is going to extensively use social networks for online campaigning and also sure that Google+ is providing all the powerful tools that was missing during the last election.

With less than a year left for the 2012 US Election, let’s watch coming weeks and months of how Google+ is playing role in his online campaign.