Nowadays apps are everywhere; smart phones, tablets, televisions, google tv, etc. Basically apps allow to extend and customize functionality that doesn’t by default come with a system. Being one of the popular feature, Google+ hangouts is going to be no exception.

To make Google+ hangouts more useful, customizable and extendable, apps or applications is being introduced in hangouts. The story behind hangout apps is simple. Google+ hangout team was inundated with numerous requests from G+ users with various feature requirements that doesn’t exist with the current hangout product. Some of them were common requests and many of them were very specific or making sense to individuals who requested them.

With limited resources and plans/features they already are working on, it was very difficult for  them to handle / support these requests. And of course they can’t include everything that doesn’t make sense to the whole Google+ community.

You might have already used Youtube, screenshare, chat, special effects, google docs, invite by telephone, etc. inside hangouts. These were all built-in apps developed and shipped by google. 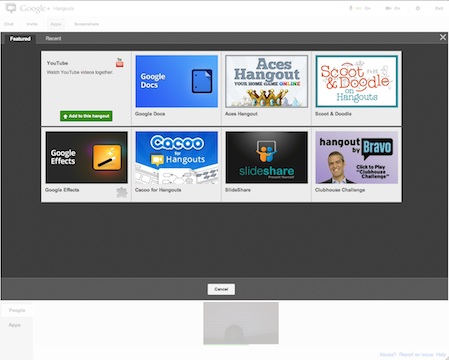 With numerous requests for features from Google+ users, it makes more sense to open up hangouts as a platform so that passionated developers could create innovative apps and extend functionality of hangouts beyond imagination. And that is exactly what has happened. Within just few days of this apps feature released to public, there are already quite number of apps available for hangouts.

When you start an hangout, you will notice a new apps button on top of Google+ hangouts dialog just next to Chat, Invite and Screenshare buttons. Click on the apps button and you’ll be shown with list of featured apps. You may hover over a app and click on Add this to hangout button to use that app.

This is a great addition to hangouts and may take hangouts to a whole new level. We have no doubt in our mind how developers are going to take advantage of this feature and create innovative, useful hangout applications.

We’ll soon launch a new hangout apps directory to list out hangout applications so that Google+ users could quickly launch and use any hangout app.