Google+ hangouts one of the hottest and popular feature on Google+ got a UI make over today. The new UI is beautiful and a user friendly interface similar to that of Google+ photo light box.

Current hangouts UI (before this change) was cluttered with main video appeared in unexpected sizes based on window re-sizes.

In the new UI buttons (Chat, Invite, Screenshare, YouTube, Reindeer) are nicely laid out in the top with the main video occupying the majority of the center followed by thumbnails in the bottom and looks roomy & clean. 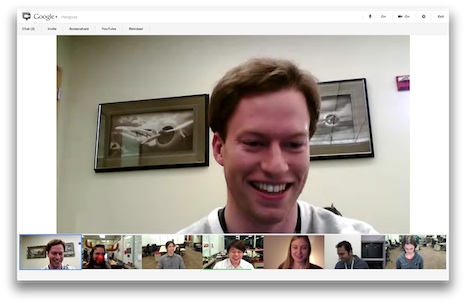 You might have heard or tried hangouts with extras which offers more features than the default hangouts for eg. screen sharing, google docs, notes/sketchpad, named hangouts, invite through phone, etc..

One of the feature, i.e screen sharing which was part of hangouts with extras is now also added to the default hangouts (refer to the screen share button on the top). When clicked, it provides a nice dialog where you can pick a window that is currently open and collaborate with your hangout participants, cool huh?

Note: We’ve noticed this UI make over only for the default hangouts and not for the hangouts on extras. As usual click on Start a hangout button on the right side in the Google+ main stream and click on the Hang out (green button) in the hangout window (to view these changes).

No problem. Just click on the gears icon on the hangout screen and change the settings from Fast connection to Slow connection (refer image). 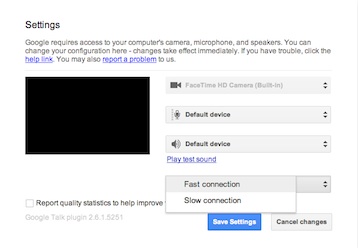 This is very useful feature. Let’s say you are using a low bandwidth or a slow internet connection (for e.g a hotel, outside, etc) your hangouts might hang or just won’t work since video streaming needs a decent bandwidth (It would be annoying and limiting of not able to use hangouts in those situations)

But there is good news, thanks to the bandwidth setting. Just flip the setting from Fast connection to Slow connection and you can just enjoy the hangout.

When you switch the hangout to slow connection mode, notice few things change

but your conversation and hangout continues without any sloppiness. When you are in a remote location or with limited bandwidth that is a better compromise to make.

The new hangout UI is a great step forward and we’re pretty sure you gonna love it.