If you have used Gmail you might have already used gmail video chat. It’s a peer to peer video technology that is used by gmail users for a long time since 2008.

Google+ hangouts is the next generation social video communication platform that allows up to 10 people (You + 9 participants) participate in a face to face video conversation. It is one of most successful and popular feature in the Google+ network.

Gmail has received many Google+ integration earlier and today’s integration replaces the existing peer to peer video with a much better modern video calling technology i.e hangouts. When you are logged into gmail chat look for the hangout icon (as highlighted on the image below) to start using this new feature. 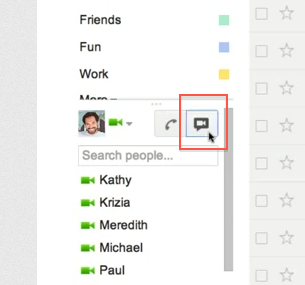 Roll out of this feature starts today and might take few weeks before all gmail users see it.

Here is Fred Brewin, Gmail product manager in his own words

Unlike the old video chat, which was based on peer-to-peer technology, Hangouts utilize the power of Google’s network to deliver higher reliability and enhanced quality. You’ll be able to chat with all the same people you did before and, in fact, with Hangouts you’ll now be able to reach them not only when they are using Gmail but also if they are on Google+ in the browser or on their Android or iOS devices.

All Gmail users will benefit from this upgrade, but if you and the person you’re chatting with also use Google+, you’ll get even more from the Hangouts experience. You’ll be able to video chat with up to nine people at once, watch YouTube videos together, collaborate on Google documents and share your screen. Plus, Hangouts has a bunch of fun effects that you can try out…because any conversation is better when you’re wearing a virtual mustache or pirate hat.

With this new integration you also get all other add-on benefit of hangouts. Hangouts apps, screen share, google docs, you can chat with up to 9 users with video, fun effects, etc.

Enjoy the new features and please share your thoughts.