If you have used Google+ hangouts (the free group video chat) on Google+ then you might have already known that it only allows a maximum of 10 users including the host.

Often we hear complaints from users that I tried to join an hangout but it was already full. Google+ team listened to our feedback and sometime back announced a new feature called Google+ hangouts on Air which when available will allow more than 10 users and a large number of audience to participate as spectators or viewers.

This feature was under very active development and today they have announced the availability of the same for certain users; public figures, celebrities and users with large number of followers. Others, don’t worry it’s coming soon to everyone who’ve joined Google+ no matter how big or small your followers list is.

Google+ HOA is still limited to 9+1 users i.e Host plus 9 participants. But the cool thing is, after the max 9 users who can join the hangout; rest  of the users will be able to watch the hangout live as a YouTube live stream. No more complaints about can’t make it to an hangout 🙂

When someone hosts a hangouts on air, you’ll find the hangout in the stream and when you click on you watch the hangout like you watch a youtube video. You’ll also have the option to join the hangout or just watch or listen to others without even joining. It’s like watching a webinar or a live concert online. 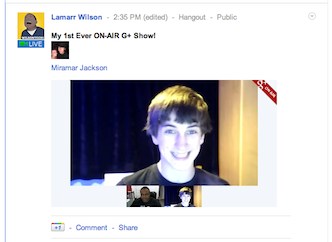 In the above image you can see Lamarr Wilson, a YouTube producer experimenting Google+ HOA (It is enabled for him). You’ll find LIVE with a Video icon next to the Google+ user that hosts the hangout and also a G+ red strip/red banner on the right with ON AIR message in it.

There is another cool feature and we are pretty sure everyone gonna love this. The Google+ HOA will be recorded and automatically uploaded to your YouTube account (of course it’s private similar to Instant Upload in Google+ mobile apps). You can then goto your YouTube account and choose to make it publicly available (Look for broadcast and record option when this feature is enabled for you). The potential for this is going to be huge. Think for example a classroom session through hangouts on air and then uploaded and available on youtube for later viewing or sharing.