Virender Sehwag affectionately known as Viru is one of the leading cricketer in the indian team. He is also the captain of Delhi Daredevils. 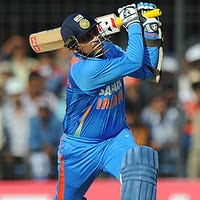 Are you wondering what he has to do with Google+? Well like many other celebrities, politicians and other personalities he has recently joined Google+ (it’s a verified profile) and quite active there sharing his thoughts and pictures.

Now let me get to the point. The reason behind this post is Virender Sehwag hit a double ton/century during the fourth one day international against West Indies few days ago. He didn’t stop there, scoring a smashing 219 has made him the only batsman (a cricket record) to score a double century behind sachin tendulkar’s 200 against south africa last year. A world record and a huge achievement for a budding cricket star like sehwag.

To celebrate the occasion of Double Century/Ton, Sehwag decided to meet with his cricket fans around the world with none other than Google+ hangouts, cool huh?

on his Google+ page

Hangout with your favorite cricket star online and congratulate him on this happy occasion.