One of the features that came with the initial launch of Google+ was the Google+ incoming stream. This is a link (refer image below) you’ll find on the left side of G+ home.

Before the addition of new features that exists today, this was the only way to find and meet new people, see what people are sharing, etc. But as Google+ started to evolve over the past 6+ months with feature after feature things have changed.

Google+ incoming stream feature and the link (to get to the stream) almost became irrelevant and redundant.

New features like What’s hot on G+, trending topics, suggested user list, shared circles, powerful google+ search, hashtags, etc., offers more features than the incoming stream. Moreover not a lot of people were using incoming stream right from the beginning (I don’t even remember when we clicked on it last time). 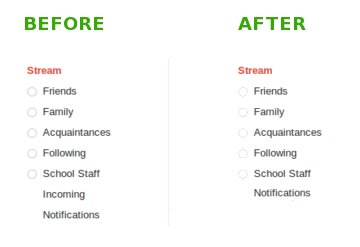 Google+ incoming stream gone, before and after view of the left panel

So with that said and more reasons outlined officially (below), google+ incoming stream is gone for good (removed).

The “Incoming” stream was a part of Google+ from the very start and it served an important purpose at the time to help people discover others on Google+. Since then however we’ve added a suggested user list, What’s Hot, the ability to share circles and in-product search with saved searches. We’ve also greatly improved our friend suggestion algorithms. These changes all served the same purpose that incoming originally did: connecting people.

I’ve also heard that some of you were using the “Incoming” stream to find people who added you to their circles so you can add them back. The full list of those people is still always available in the people editor under “people who have added you -> not yet in circles”.

The above reasons would have given a big relief that you are not gonna miss anything instead only to gain, keep plus’ing.