Circles in google plus is a set or collection of people you organize with shared interest. For example you may create a circle called family and add all your family members to it.

In Google+ you may create as many circles you want and even the same person may exist in many circles. For example, you may want to include your friend who is also a colleague in two different circles namely Colleagues and Friends respectively.

Extended circles are circles’ circles. Let us explain with an example,

In this example, when you add Extended Circles, Jerry will be able to see the content you shared with Tom.

Nope, there is a catch or else it’ll lead to content spam. The catch is, Tom has to enable the Friends circle that Jerry  is in to be visible in his profile among other members in his circle (refer screenshot below).

You’ll also not able to see any person in the Extended Circles and it’ll be changing from time to time. 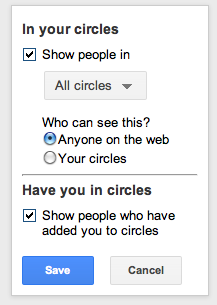