This is an announcement about YouTube planned downtime maintenance on August 26th 2013 for about 6 hours.

+Dori Storbeck of Google has notified that they have planned for a YouTube maintenance window during 6pm – 12 am PST on Monday August 26th. 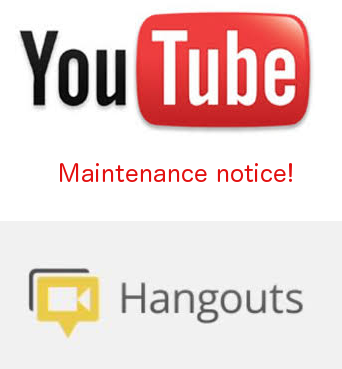 Here is the announcement

During this time, you may not be able to initiate or end an HOA broadcast. Commenting and subscribing may also be impacted. Additionally, HOA video recordings may take longer than usual to process and become available.

Since Hangouts on Air (broadcasting live or upload once broadcast complete) rely heavily on YouTube, Hangouts on Air service may be interrupted during that time. It’ll take longer than normal to process Hangout Video before appearing on YouTube.

Google advises to plan your hangouts either before (with enough time so that hangout completes before downtime) or after the scheduled outage to avoid any complications.