Google today put an end to the speculation of How many users does Google+ actually have? As we stated in our earlier post of 150 million active users, google has released official statistics as part of 4th quarter earning conference call. 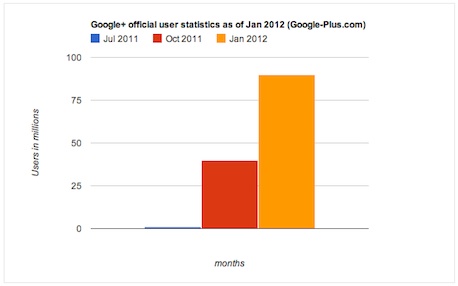 According to the official statistics released today, Google+ has 90 million+ users as of January 2012 globally making it the 4th largest social network while still maintaining the fastest growing network of all times.

Google had a really strong quarter ending a great year. Full year revenue was up 29%, and our quarterly revenue blew past the $10 billion mark for the first time,” said Larry Page, CEO of Google. “I am super excited about the growth of Android, Gmail, and Google+, which now has 90 million users globally – well over double what I announced just three months ago. By building a meaningful relationship with our users through Google+ we will create amazing experiences across our services. I’m very excited about what we can do in 2012 – there are tremendous opportunities to help users and grow our business.

Looking over the numbers, Google+ posts steady growth month over month since the launch in July 2011. In fact it has more than doubled since the last official announcement of 40 million users 3 months ago.