Few days ago we shared statistics from Nielsen’s that talks about Google+ ranking 8th out of top 10 social networks in the U.S. Now we have two more reports from industry leaders in measuring digital world namely comScore and Hitwise (for the year ending December 2011).

These two reports clearly highlight the growth of Google+ over the months of November and December 2011. Please note that these two reports are specifically for the U.S. social network market and doesn’t have data for the entire world.

According to Hitwise which announced in a tweet, Google+ enjoyed a steady and continuous growth for the past 8 out of 9 weeks in the U.S (i.e right after the launch of Google+ for public signup)

and according to comScore,  in their State of the U.S. social networking market report 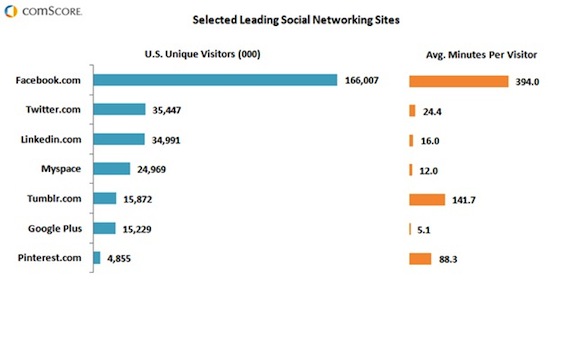 Here is what comScore has to say about Google+

Google+, which has received a great deal of attention this year, with 15.2 million U.S. visitors in November. While Google Plus nearly matches Tumblr from an audience standpoint in the U.S., it does not yet attract similar levels of user engagement on its primary web pages. Importantly, these figures account for activity on plus.google.com and do not include engagement with the Google Plus toolbar or other distributed content throughout the Google network of sites. Given Google’s strategy of integrating Google Plus throughout its network, including Google Search and YouTube, it will be interesting to see if increased exposure to this extended social functionality exerts any gravitational pull towards the primary Google Plus experience