Google+ has been continuously growing over the past few months and was steadily holding No. 8th rank for a while in the top 10 US social media websites.

In recent weeks the growth has been accelerated and two weeks back grabbed the No. 7th position and was just behind Pinterest for the week ending 2nd June 2012.

Now according to the latest reports from Hitwise (a experian company that monitors US web traffic), Google+ has unseated many of the closest networks including Pinterest, LinkedIn, MySpace, Tagged and Yelp and captured the 5th position in the top 10 social media websites (refer image below). 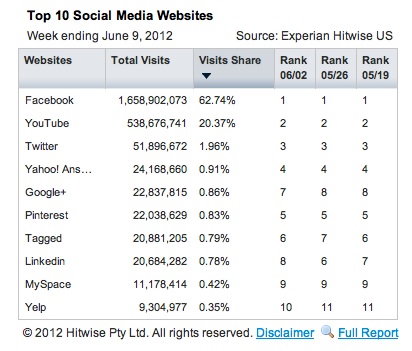 Hitwise only measures US web traffic and therefore mobile traffic is not included in this report.

With the recent major UI redesign, updated iphone and android mobile apps and the recent introduction of google+ local (google+ events on the horizon?) all helping the network grow at a faster pace.

Various monitoring agencies have predicted Google+ to reach 400 million by end of 2012. Is this possible?

Well google i/o 2012 is just 2 weeks away where most of the time google announces many of their statistics (right from google+ traffic, total users, android activations, chrome browser installs and many more that of google products).

That would help us predict when we hear the total user numbers as of june 2012 (we already know about 170 million users as of april 2012) and how much it can gain in the upcoming 6 months. That said, now all eyes are on Google I/O 2012 in 2 weeks. Let’s wait and see.