Last week there was rumors about new features like google+ events and the local feature. To put rumors to rest local feature was launched yesterday and is available to everyone.

Today some people have came across google+ events screen while trying to use calendar. Hangouts being one of the most popular feature but it lacks one key feature that would skyrocket it’s usage and that is none other than scheduling (or scheduling an hangout ahead of time).

Normally webinars and meetings are scheduled, published and happen in the future. But hangouts on the other hand have to be done on the spot (and communicated offline) i.e start an hangout and wait for people to participate which doesn’t work for everyone.

Scheduling a hangout for a specified time is one of the most sought after feature.  If the screenshots shared in G+ are true, scheduling may be included as part of the events via calendar. That would be so cool, can’t wait. 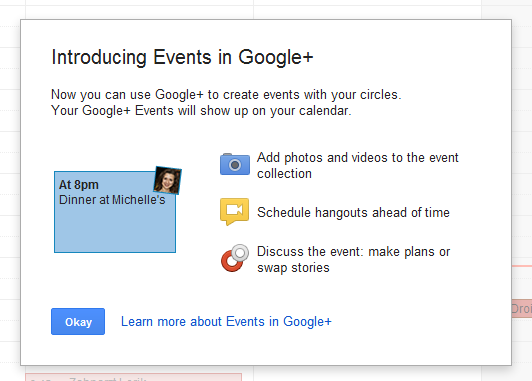 Many people migrating from facebook have mentioned that they miss events and expect events as quick as possible in google+. We are with millions of G+ users and hope to see this feature soon.