Google+ social games launched few months ago along with around 16 games.  With the recent addition of another 7 new games the total number of games has increased to 28. 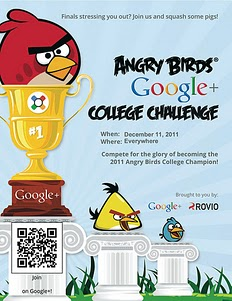 Whether it’s on web, mobile or tablet; Angry birds from Rovio is one of the most popular game and Google+ is no exception either. It is very addictive in Google+ there due to it’s social nature.

Now, Are you a angry birds game geek or expert and want to put your skills to test? Then here is your challenge to become the 2011 angry birds college champion.

Angry birds is planning to celebrate it’s second anniversary on December 11th 2011. As part of the fun they are planning to let fellow students to compete in some good old pig smashing on the Google+ version of Angry birds.

Warning: This is only for college or university students over 18 years old (read eligibility below)

The player that reaches the highest level with the highest score on that level will be announced as the winner by +Angry Birds and +Google+ on Monday, December 12, 2011.

Keep an eye out on +Angry Birds College Challenge for updates on posted leaderboard scores to see how your competition is doing.

Fire up your skills and knock that bird and become the 2011 Angry Birds College Champion!!! All the best.

Update: Phillip Marlow of Virginia Tech won this challenge with a high score of 160,000 in level 3-21. Congrats Phillip!!!