Recently we wrote about the addition of 7 new games to Google+ games that was well received by gamers. More choices means challenges and more fun for game lovers.

Now even more good news for gamers. Google+ games section has gone through a major overhaul providing more control and options for picking and selecting your favorite games.

And that’s not all, 4 more new games address as outlined below. That raises the total to 32 games in Google+. 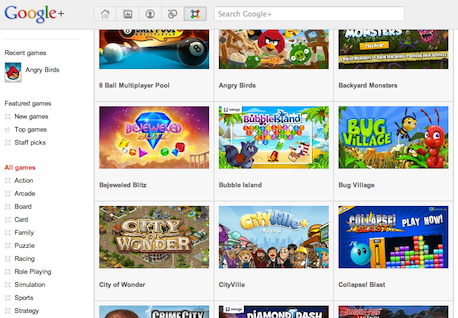 Shoot eight ball pool against live players. POT the 8 BALL LAST, after you’ve potted your other balls to win. Visit the shop and buy awesome new cues. Now with new 16 and 32 player tournaments!

Raise a monster army, attack other players, and defend your base in the best real-time strategy game on Google Plus!

Experience the richest racing simulation ever released online- and the best part is it won’t cost a thing to get started right now!

Learn the ropes, build your empire, and rule the streets of New York in a brand new strategy game! Do you have what it takes to rise to the rank of Don? Join the family today.