Google Chrome on Desktop is already the No.1 most used browser in the world since July 2013.

From a mobile platform standpoint, Google Chrome is the leading browser of choice and market share in the Android eco system.

Now there is more good news. According to this recent report by Chitika (a leading online advertising network),  Chrome on iOS devices has made significant progress and has reached an all time high of 3% browser market share as of September 2013 (refer chart below). 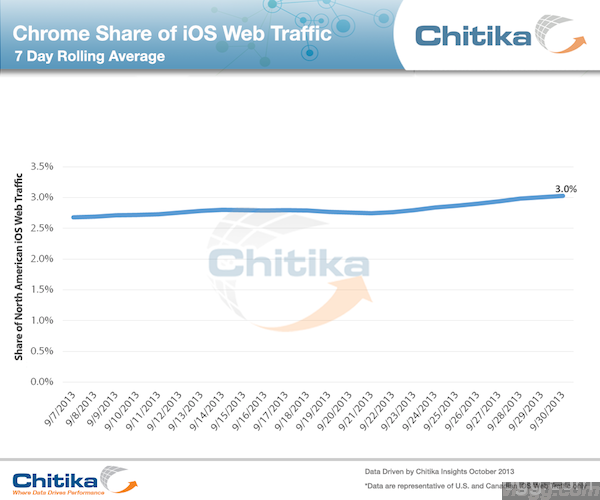 If you look the number (i.e 3% alone) it wont be such a big deal. Chrome on iOS is just getting started and it is just a matter of time. According to the report, Chrome’s growth on iOS was stagnated at 2% for quite some. Now there is significant progress and usage has jumped to 3% since September 2013 after the release of new iOS Chrome App. It already has recorded as one of the most download apps in app store.

Let the drum roll for Chrome’s market share on iOS device begin and we’ll review again in few months. Do you use Chrome on iPhone/iPad? What do you think? Please Share your thoughts below.