Google+ has reached today another new remarkable milestone of 400 million+ total users as of september 2012 according to a new official statistics released today.

+Vic Gundotra, VP of Engineering at Google has broke the news that Google+ is now 400 million+ total users strong and 1 out of every 4 is active on the network. i.e over 100 million users post, share and actively use the network.

This undoubtedly makes it is the second largest social network of all times only next to its rival facebook. Congrats Google+ on this remarkable achievement.

Part of the announcement was the acquire of Nik Software, the makers of the popular SnapSeed mobile photo editing app (an instagram rival). With Snapseed developers soon going to be part of google+ team, we can expect tremendous changes to photo editing in google+ (mobile app and the creative kit web app). 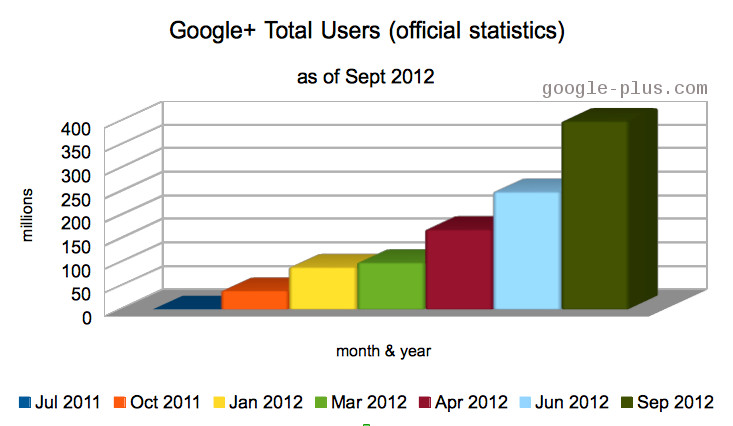 Here is +Vic Gundotra’s words about the latest achievement

This week we also hit an important milestone–over 400,000,000 people have upgraded to Google+. It was only a year ago that we opened public sign-up, and we couldn’t have imagined that so many people would join in just 12 months. While Google+ is all about creating a better experience across Google, it’s also a destination. And here too, I’m happy to report that we have just crossed 100,000,000 monthly active users on Google+ (plus.google.com and mobile app).

During our last announcement of 250 million+ total users in June 2012, we predicted that 400 million users may be reach by end of the year 2012. But the fastest growth of the network has exceeded our expectations and reached that milestone 3 months ahead of our prediction. With that we are safe to say and raise our expectation that the network could reach 450 million – 500 million total users by end of year 2012.

Google+ is a ghost town, Google doesn’t get social, etc., are all history now. All these statistics reveal one simple fact:  People love Google+ and that’s all matters. Enjoy +’ing!!